That’s the last time that Apple added support for a new language in iOS.

It’s been years since I’ve started filing radars and hoping that Apple would add my native Bulgarian language to iOS and with each new release, the release notes are the first thing I pour through, looking for any new language editions.

Unfortunately, though, not only is Apple seriously behind on language support, with each year new features come that are geolocked and exclusive.

With each release more and more functionality is being showcased in keynotes that’s out of the reach of a big part of the world.

In this post I’ll go through a couple of major features and see how iOS compares to Android in regard to localization.

With the addition of Catalan, Hungarian and Vietnamese in iOS 4, 7 years ago, the number of supported languages grew to 32. And then just stopped.

So how many languages does Android support, compared to Apple’s 32?

A quick research comes up with 188 as of Android 7.0 Nougat and that’s not even counting the dozens of different variations that most languages have.

With six times more languages supported, no wonder Android is so prevalent, especially in poorer countries, where people might not speak one of the languages that iOS supports.

The general consensus is that Apple’s Maps implementation is lagging behind on Google Maps’ offering.

That’s doubly so, when you consider that Streetview on Google Maps covers most roads in these areas. 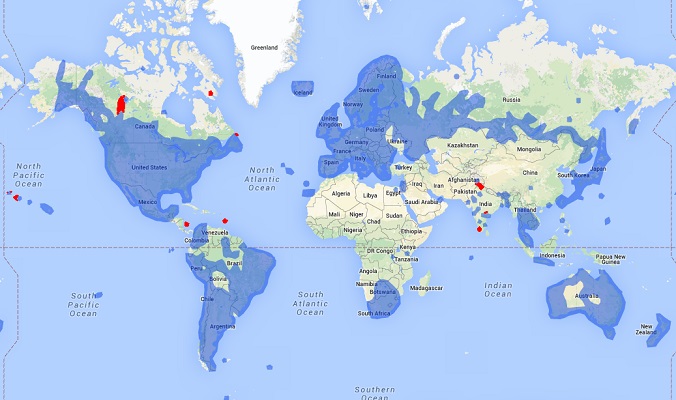 Whereas Apple’s Flyover covers about 200 cities in just 25 countries.

In iOS 9, Apple added support for navigating public transit, even giving you directions to the closest entrance to a subway stop.

Two years later, don’t count on getting any of that outside of the 50ish cities that Apple currently supports, while Google keeps on adding to the more than 200 cities that it supports.

Traffic information is similarly limited to 54 countries, almost half of Google’s 99 countries.

Additionally, things like points of interests, business reviews and ratings are mostly non existent outside of 15 countries.

Comparing Siri’s supported languages to Google’s is a bit harder to do, mainly since Google has a lot of voice recognition software that we can compare it to.

With its 21 supported languages, Siri is ahead of Google Assistant’s 8 languages, while being way behind on Google Now’s 119 languages.

Even within its supported languages, Siri can only do things like querying sports, restaurant reservation, movie showtimes, etc in a very limited subset of these languages and countries.

With Apple not expanding that list, it seems that if you’d like to take advantage of these features, you better move to a more robustly supported country.

The recent rising popularity of machine learning brought us a way to have Siri organize your life and come up with the things that you’d like to do most, based on past experience. Unfortunately things like Spotlight suggestions are out of the question for people living outside of the supported 28 countries.

Similarly things like contextual and emoji predictions are limited to about 8 languages.

Remember when last October Apple spent a significant amount of its Macbook reveal event to introduce the new TV app on iOS and tvOS?

It went on to replace the Videos app in supported locales and link up all of your TV accounts.

That’s still only supported in the US and while I have no illusions that it’ll ever support more than a couple of countries, it still makes me sad to be exposed to something that’ll never grace my device. Unlike the TV app, where Apple has to negotiate for rights and distribution, the News app, introduced first 2 years ago, doesn’t have to concern itself with anything like that.

Its web crawl bot crawls the web and different feeds and aggregates articles, organizing and tagging them.

The reason why it’s available in only 3 countries?

No one outside of Apple knows, considering how there are dozens of apps on the AppStore that do pretty much the same thing.

Apple Pay is another technology, that’s heavily dependent on outside factors like banks and credit unions.

The good news here is that Apple is ahead of the curve with its support for 21 countries vs Android Pay’s 18 and Samsung Pay’s 19.

Newer technologies that Apple spearheads seem to be the ones that get the most attention with Apple again being ahead with 36 countries vs Android Auto’s 31.

It seems that Apple has a lot of ground to make up and the best way to start would be at the core. Apple’s not as popular as Android in developing countries and Europe and a lot of that can be attributed to the lack of language support and feature exclusivity for a lot of its main features.

With the saturation of smartphones and Apple’s strategy of selling mostly premium hardware, mixed with premium software, it’s my opinion that diversifying its localization support will help it bring on more people in places, where it’s already well established.

If you’d like to help out and make that happen, consider duplicating radar #16659478 so that it’s not 8 years before Apple adds a new language.

This site uses Akismet to reduce spam. Learn how your comment data is processed.

Previous Post: The easy way to parsing JSON with Swift 4
Next Post: Building an Alarm app on iOS